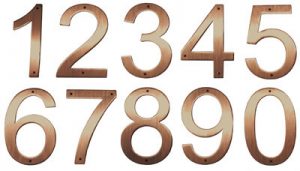 Homeowners that utilize large solid copper house numbers may do so for its sheer beauty without ever realizing that their choice of copper house address numbers has an extraordinary architectural record.

Copper, as a decorative building material, has been used on every continent in the world for thousands of years – and most often, by leading rulers and aristocracy.

Whether one prefers the brilliance of polished copper house numbers with a brushed satin finish or the rustic, weathered finish of aged copper patina house numbers, either choice places a homeowner in the finest historical company one can imagine.

During the ancient Roman era copper was mined on the isle of Cyprus, where it received its name (“cyprium” is what they first labeled it). Copper was so valued that the Romans actually used clumps of copper for currency.

Even today, copper is treasured as a fine building material and used for the most elegant of decorative décor items including modern house numbers.

Once poured, the large copper house numbers are then finished in the homeowner’s choice of either an elegant hand-sanded, brushed satin finish with protective UV clear coat (which will keep the copper house numbers looking new for years to come) or a natural copper patina finish that gives a natural, aged copper look (rather than a painted on patina look) to your copper house address numbers.

Your neighbors will believe your aged copper house numbers have been mounted at your residence for centuries.  Moreover, over time, your copper patina house numbers will continue to age gracefully and beautifully.

Additionally, a clever solar lamp can be added to your selections so that your large copper house numbers may be illuminated in evenings and early mornings.

The ingenious solar powered spotlight requires no electrical outlet, can be easily wall mounted, and will turn on at dusk and shine to dawn or for up to fourteen continuous hours to keep your copper house address numbers visible at all times.

Copper mounting materials (in flush mount or raised mount for that 3D look) and the full gambit of copper numbers from zero to nine are all available online at The Mailboxworks.