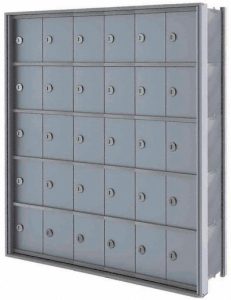 Auth Florence cell phone storage lockers are being installed in or near many of America’s courtrooms.

As judges ban cell phone use in their law court buildings, especially within courtrooms hearing criminal cases, the inseparable and ubiquitous attachment citizens have to their smartphones is being tested. However, most citizens grasp the legitimacy of the cell phone ban and are simply looking for a place to store their cell phones while in court.

Illinois’ Cook County Chief Judge Timothy Evans explains, “Our judges were complaining about street gangs in the courtrooms using cell phones to photograph witnesses. They are bold and brash.”

Of course, using cell phones to photograph witnesses in a criminal case is step one in an intimidation campaign against such witnesses. So, like in many of America’s courtrooms, Judge Evans banned all cell phones from the courthouse.

While many visitors bemoaned the inconvenience of the cell phone ban, Evans stated, “We want people to feel safe when they come to court, whether they are coming as a witness or a juror. We don’t want them intimidated by some of these people who boldly take their phone cameras out and take pictures right in front our judges.”

Cook County is not alone in banning cell phones, tablets, and other electronic communications devices from the courthouse. In Illinois, 48 counties out of 102 have similar cell phone bans, as well as state and federal courts throughout the country.

In Broward County, Florida, the penalty for violating the cell phone ban is a contempt of court charge, which can include a sentence of 30 days plus a $5000 fine.

Many American courtrooms are now installing wall mounted cell phone storage lockers to assist patrons of the court with their desire to follow the law while keeping their cell phones close and safe. Cell phone lockers allow patrons to swiftly secure their cell phone in a small locker storage unit either secured by combination lock or key lock.

Moreover, for courthouses that have yet to provide cell phone storage locker solutions, many nearby businesses are seeing a market opportunity.

For example, in Flint, Michigan, the police guarding the front entrance of the Genesee County Courthouse will ask patrons to leave their phones in their cars. However, such a request presents a significant problem to patrons who rode the bus or parked at a distance that would make them late to court.

So, enter Dan Spaniola, the gracious proprietor of Paul’s Pipe Shop, which is just across the street from the courthouse.

Dan has obliged so many requests to hold onto cell phones that he has created a makeshift system of small boxes behind his store counter.  He simply hands his patrons a small token and keeps the phone secure until the owner returns with the token. Dan explains that there is no charge and that it is merely an honor system.

In addition, some cell phones are held for months as those who have stored their phone in his pipe shop have been tossed in jail and have been unable to retrieve their phone.

Unlike Dan, many proprietors are charging for such cell phone storage services using storage lockers from suppliers such as the nation’s leader, The MailboxWorks.

By installing wall mounted or pedestal cell phone lockers, local proprietors near courtrooms are able to provide a secure solution for temporary cell phone storage without the associated liability of holding a phone behind a sales counter. At fees of two to five dollars per phone (and sometimes per day), the cell phone storage lockers provide a nice steady stream of income.

For example, The MailboxWorks Florence cell phone lockers provide 60 individual compartments for cell phones that if rented at a mere three dollars per day can yield up to $5400 per month. It does not take aspiring entrepreneurs very long to compute a payback period of just a mere week or two.

Some, including a young entrepreneur in Fort Wayne, Indiana, are trying to receive court approval to install kiosks directly outside the courthouse so that the Florence cell phone lockers are even more accessible and convenient for patrons to store their cell phones.